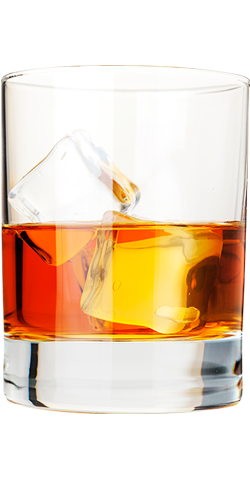 Whiskey is a spirit made from a fermented mash of grain, distilled under 190 poof and stored in oak barrels before bottling at no less than 80 proof or 40% abv. (alcohol by volume). Whiskey must be made exclusively from grains, either as a single grain or a blend. Barley, corn, rye, and wheat are most commonly used in whiskey production. Preparation and distilling methods change depending on the style. Scots and Canadians spell whiskey without the “e,” while Americans and Irish spell whiskey with the “e.” Whiskeys are often labeled with an age statement which denotes the youngest whiskey used in the bottle. Origin: It is generally believed that the Celts were the first to produce whiskey in Ireland in the 15th century. The present day name of “whiskey” comes from the Celtic “uisgebeatha” (pronounced whis-geh-BAW), meaning water of life. The name was anglicized to “whiskey” when the spirit was brought to England. 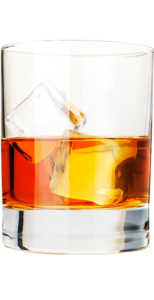 The two most common American whiskeys are bourbon and Tennessee whiskey and can be made from a variety of grains. Corn is the dominant ingredient used and must be at least 51% of the mash to be labeled a “straight whiskey.” Straight corn whiskey is the exception – it must contain at least 80% corn. Bourbon must be produced with at least 51% corn and aged in a new charred oak barrel for a minimum of two years. Other whiskey sub-styles differ and allow used oak barrels in aging. The new oak imparts a sweet, vanilla, toasted caramel flavor. Tennessee whiskey is made in the same manner as bourbon, but must be filtered through sugar maple charcoal prior to aging.

Something that separates a few American whiskey varieties from European styles, is that they are aged in new charred oak barrels and remain under 80 percent alcohol by volume. Under American whiskey, there are six distinct categories with differing taste profiles; however, broadly speaking, American whiskey is sweeter, less smoky, and less peaty than Scotch and Irish whiskey. It is has less of a briny or smoky flavor because it is rarely smoked with peat.

Bourbon – Whiskey must be made of 51 percent corn mash to classify as bourbon. Famously, bourbon is produced in Kentucky but is now made from coast to coast in states like New York, Indiana as well as California.

Tennessee – While similar to Bourbon in terms of grains used, Tennessee whiskey it goes through charcoal filtering to mellow the flavor during fermentation and aging.

Rye – By definition rye whiskey must be at least partially composed of rye mash and distilled to no more than 80 percent alcohol by volume.

Wheat – Wheat whiskey is made of 51 percent wheat mash.

Canadian whiskey is often known as “rye” since historically the rye grain was a dominant flavoring component. Today a variety of recipes exist that include the use of corn, wheat, and barley. Canadian distillers produce and age each grain separately, then blend the aged whiskies together to create the desired flavor profile, which is typically soft and light. It is ideal for mixing or pouring over ice.

All Scotch whisky is made from malted barley and aged in Scotland for no less than three years in an oak barrel. Scotch is double-distilled and often uses peated malt to impart a smoky flavor. Two main types of barrels used are American oak and French oak, which impart different nuances into the whisky as the spirit ages. Scotch can be single malt or a blend. Single malts are produced from 100% malted barley from one single distillery. A Scotch blend is made by combining whiskies from various distilleries and can be a blend of malted barley and grain whisky.

Irish whiskey is distilled from a fermented mash of grains, including malted & unmalted barley, corn, rye, wheat, and oats. It is different than Scotch in that Irish whiskey uses unpeated malt and is triple-distilled before aging a minimum of four years in oak barrels. The whiskey that results is light and fruity, with some leathery, earthy overtones.

Japanese whiskies are reminiscent of the Scottish Lowland and Speyside style. They are smooth, delicate, and often perfumed with honey to add sweetness. Today, Japan is developing a style of its own as popularity and demand grow. Japan and Scotland are to whiskey as what California and France are to wine. While one may have history, tradition and topography on its side, the innovation, technology, and acute focus on crafting taste have catapulted the newbies to the forefront.